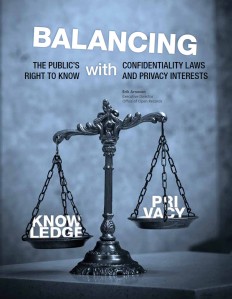 The County Commissioners Association of Pennsylvania recently asked me to contribute an article to the Fall 2019 issue of Pennsylvania County News, which I was happy to do.

Here’s the complete text of that article.

Pennsylvania’s Right-to-Know Law (RTKL) presumes that all government records are available to the public – but it also recognizes that there are times records must be shielded to comply with confidentiality laws, to respect various privileges, and to protect legitimate privacy interests.

In our training sessions, the Office of Open Records (OOR) often points out that the RTKL is not itself a confidentiality law. In other words, the RTKL does not require agencies to withhold any records. Instead, it allows agencies to withhold records when certain conditions apply. (For example, records can be withheld if their disclosure would endanger public safety, reveal police notes about an investigation, or identify an individual receiving social services.)

But there are laws which require confidentiality, and those laws must be followed.

Some of the laws, such as the Family Educational Records Privacy Act (FERPA), apply to a limited number of agencies. FERPA, a federal law, protects the privacy of student education records and applies to all schools that receive funds from the U.S. Department of Education.

Similarly, the Criminal History Records Information Act (CHRIA) is a state law that applies to state and local agencies and limits the release of certain criminal history record information. CHRIA often applies to records requested from District Attorneys, so to the extent that a county’s Agency Open Records Officer (AORO) also handles RTKL requests for the District Attorney, it’s important for the AORO to be aware of this law.

The Disease Prevention and Control Act, which prohibits the release of certain reports of disease and any records maintained as a result of actions taken as a consequence of those reports.

The Motor Vehicle Code, which holds that certain vehicle accident reports are only available to certain government officials, people conducting traffic safety research, and the people involved in the accident, their attorneys, and their insurance companies.

The Uniform Construction Code, which allows agencies to prohibit the release of certain documents related to the construction of buildings.

The federal Copyright Act, which prevents the copying of certain records – although agencies are generally required to allow requesters to inspect those same records.

While that’s is not an exhaustive list, it provides a good overview of the type of laws that contain confidentiality provisions that must be considered when responding to certain RTKL requests.

Of course, no AORO is expected to know and understand each confidentiality law. However, an AORO should develop an ability to recognize when such laws might apply and then consult with agency-level experts, and possibly the county solicitor, for specific guidance on a case-by-case basis.

When applying a confidentiality law, it’s advisable to ensure that the language of the statute is not too broadly applied. One example is a recent case where the OOR held that both residential and commercial building plans were confidential under the UCC. However, the Philadelphia County Court of Common Pleas disagreed with that application of the UCC and overruled the OOR’s final determination, finding that “foundation plans” and “building plans” for residential properties must be released.

Finally, the state constitution includes an implied right to privacy for some personal information, such as home addresses. In such cases, a county should apply a balancing test before releasing the information. Specifically: Does the public interest in disclosure outweigh any privacy interest in non-disclosure?

The OOR’s website includes a searchable database of our final determinations – every decision issued by the OOR since it opened in 2009 – that can assist an AORO’s understanding of the interaction between the RTKL, confidentiality laws, privilege, and privacy interests. Under the “Appeals” tab on the website, choose “Final Determinations.” That will lead to a search tool. The best first step in using the search tool is to enter a subject matter, topic, or type of record in the “Description” field.

The OOR also schedules regular training sessions, both online and in person, which will be of interest to AOROs, as well as many county officials and employees. The “Training” tab on our website has all the details.

Finally, we’re always available to answer questions by telephone (717-346-9903) and email (openrecords@pa.gov). One of my goals as Executive Director of the OOR is to make the RTKL as easy as possible for both agencies and requesters. Please don’t hesitate to contact us with any questions at all.

This site uses Akismet to reduce spam. Learn how your comment data is processed.