The Office of Open Records has put together an event we’re calling the Right-to-Know Law Rountable.

The RTKL Roundtable is the first event of its kind — a half-day session of panels and speakers filled with topics specifically of interest to people who use the RTKL as requesters. It’s taking place in Harrisburg on Sept. 5, 2019, starting at 1 p.m.

The lineup is packed with great speakers and moderators, including Judge Dominic Pileggi (author of the RTKL), attorneys whose practice includes RTKL work, journalists with great experience using the RTKL, and college professors.

The RTKL Roundtable is free and open to everyone. Although seating is necessarily limited, we are hoping to record the event and make it available online at a future date.

This program has been approved for 3 substantive CLE credits. It will be held at the office of the Pennsylvania NewsMedia Association, 3899 N. Front St., Harrisburg, PA 17110.

For the complete agenda, and to register, click here.

As a general rule, the Office of Open Records does not participate in any appeals beyond the OOR itself. Occasionally, however, we are compelled to.

In the case of Lehighton Area School District v. Campbell, stemming from OOR Dkt. No.: AP 2018-2187, the District’s trial brief included a claim that the Right-to-Know Law is unconstitutional.

Today, the OOR filed an Amicus Brief, arguing strongly in support of the RTKL’s constitutionality. (Judge Steven R. Serfass had previously issued an order allowing the OOR to file the brief.)

In its trial brief, the District wrote: “Is the Pennsylvania Right-to-Know Law unconstitutional as it is written and as it is applied. Suggested answer: Yes.”

The District and its solicitor argued that the RTKL is unconstitutional because the OOR declined to hold a hearing in this case, thus depriving the District of due process: “Under the statute, the District is not allowed to appeal the denial of a hearing, even if that denial results in an inadequate record, as was the case here.”

The OOR’s brief details the ways in which the RTKL specifically ensures due process, including the fact that both parties enjoy notice and an opportunity to be heard before the OOR and the fact that the trial court may choose to (as it did hear) hold a hearing to accept new evidence.

The OOR also wrote that the “District submitted conclusory affidavits to the OOR that simply failed to establish a nexus between the records requested and the exemptions cited. For reasons known only to itself and its solicitor, the District delayed submitting supporting evidence until the hearing before this Court. The same testimony that was given at the hearing could and should have been provided in affidavit form to the OOR.”

In a footnote the OOR added, “Over the five most recently completed calendar years, the OOR has docketed and adjudicated more than 11,000 appeals. Agencies of all sizes regularly submit evidence to the OOR far more complex than that offered by the District before the OOR and this Court. None, other than the District, has advanced a claim that the RTKL is unconstitutional.”

Here is the OOR’s complete Brief of Amicus Curiae.

Earlier today at the Office of Open Records in Harrisburg, I hosted a training session designed for requesters, including members of the media and members of the public.

The session focused on the Right-to-Know Law, and I appreciate everyone who attended.

A similar session is scheduled to take place on October 10. Get the details and sign up here.

This session focuses on what new AOROs need to know to respond accurately and efficiently to Right-to-Know Law requests, including agency obligations, prohibitions, deadlines, payment issues, and tips on managing an agency’s records.

The session will be hosted by George Spiess, the OOR’s Director of Training and Outreach. There will be plenty of time for questions from attendees.

More information and details on how to join the webinar are available via the OOR’s Training Calendar.

Earlier today, I spoke to a group of District Attorneys at a conference organized by the Pennsylvania State Association of Elected County Officials.

The conversation focused on the Right-to-Know Law and the unique role played by District Attorneys in terms of hearing appeals filed which are related to law enforcement records held by local agencies such as police departments. (Section 503(d)(2) of the RTKL.) It was a great conversation, and I appreciate the invitation.

Earlier today, I spoke to a gathering of Pennsylvania’s elected county treasurers, hosted by the Pennsylvania State Association of Elected County Officials.

The session, part of a conference running June 11-14, was held in Cranberry Township, Butler County, and it focused on the Right-to-Know Law.

I very much appreciate the invitation.

The Office of Open Records webpage about Pennsylvania’s Sunshine Act was updated recently.

And made noteworthy updates to three sections:

We also clarified that advance public notice is required for agency committee meetings, and that published notice must be in paid newspapers of general circulation (in addition to being posted on site).

Each morning, Tuesday through Saturday, the Office of Open Records sends an email summarizing every Final Determination issued the prior day.

If you deal with Pennsylvania’s RTKL on a regular basis, or you’re interested in Pennsylvania government transparency generally, I think it’s a must-read.

To subscribe, just head over to the OOR website and fill out this simple form. You can also choose whether or not you want to subscribe to our occasional, more general newsletter about issues related to the RTKL, the Sunshine Act, and government transparency.

Here’s a sample of what the email looks like: 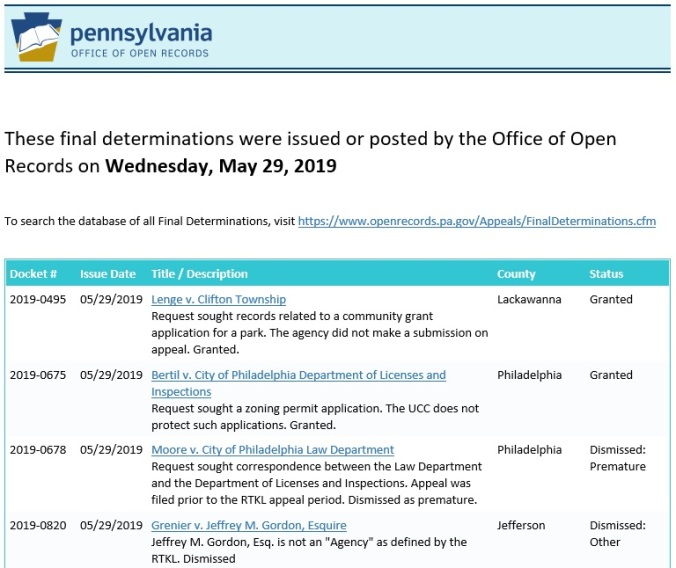 The Office of Open Records is hosting a webinar titled The Right-to-Know Law for Law Enforcement on Thursday, June 13, at 10 a.m.

This session, hosted by George Spiess, our Chief of Training and Outreach, will focus on those aspects of the Right-to-Know Law that are specific to police departments, such as investigatory records, the impact of Act 22 of 2017 (which covers police recordings), and CHRIA.

More information about the webinar is available on the OOR’s Training Calendar.

The OOR also has published a RTKL Guide for Law Enforcement Agencies.

This morning at the Office of Open Records in Harrisburg, I hosted a training session for a group of media requesters. The session focused on the Right-to-Know Law.