Philadelphia is the state’s most populous county (and city), so it doesn’t come as a surprise that Philadelphia agencies were involved in more local appeals than those in any other county. The top 5 also included Allegheny, Montgomery, Dauphin, and Luzerne counties.

The first map below shows the number of non-inmate appeals involving local agencies which were filed with the OOR in 2015. (All local agencies — e.g., county government, school districts and municipalities — are included in each county total.) 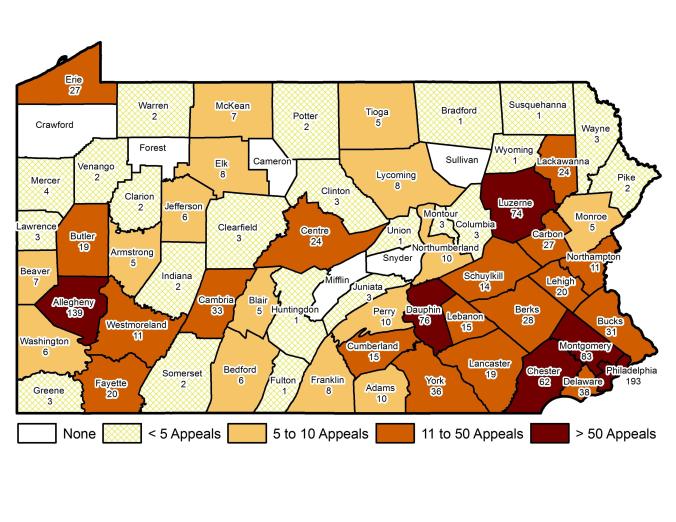 But… it might come as a surprise that Carbon County was at the top of the list in terms of per capita* appeals filed in 2015. The top 5 also included Dauphin, Elk, Cambria, and Luzerne counties.

The map below shows the number of non-inmate appeals involving local agencies filed with the OOR in 2015 per 100,000 population. (All local agencies — e.g., county government, school districts and municipalities — are included in each county total.)

The complete Office of Open Records 2015 Annual Report is available on our website (along with previous years).

These maps illustrate workload; the data doesn’t necessarily correlate to the quality of agency responses within a given county. There are many factors to consider in evaluating agency responses and determining why a given number of appeals were filed. For example, it’s quite possible that one or two incidents could spike the number of requests (and potentially appeals) at a given local agency. Also, larger population areas tend to have more requests filed, often with more nuanced issues involved.

Finally, I note that the Office of Open Records has no way of knowing how many appeals are simply granted by agencies. That data is not collected on a statewide basis.

This site uses Akismet to reduce spam. Learn how your comment data is processed.